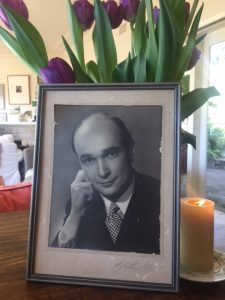 Would that he had lived, I could have known him better. Last month I turned 60, which means I am now older than my father ever was. None the less, thirty eight years after his death I feel his influences still. We look alike, though fortunately I have all my hair, we share a sense of humour and many of his merry quips fall effortlessly and frequently from my tongue. I correct my daughters speech exactly as he did mine, “it is ‘used not to’ Holly/India, not ‘never uset to'” and the like. I, like him am a chef, though at 27 he gave up his knife for the law. I refer to him often and wonder how he would have expressed his joy and appreciation for who I grew to be and who his grandchild is. Would he have ventured here? He was frequently a troubled soul, for whom life held many challenges but what I recognise now, is that he upheld his values and gave his all to provide us a full and exciting life, in which integrity matters and every type of food should be tried – for all of which, I am eternally grateful.  His suits were tailored, his collars starched, he wore a bowler hat and carried an umbrella as he headed off to ‘town’, a proper English gent he was. Now, clearly a man of an era passed. I celebrate who he was, though I know, I knew little of him really.